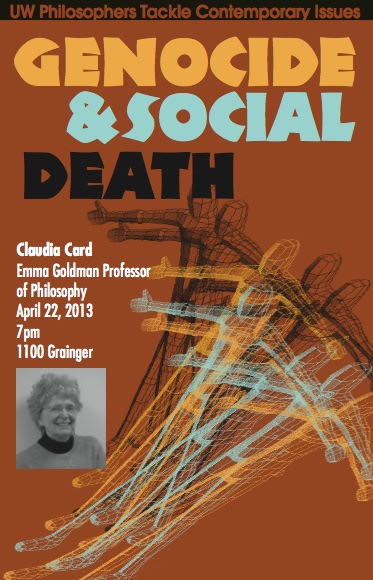 On April 22nd, 2013, Claudia Card presented her talk entitled “Genocide and Social Death”. A recording of the talk is available here.

Samantha Power subtitled her book, “A Problem from Hell,” “The Age of Genocide.” Yet genocide has received relatively little sustained attention from philosophers in the U.S., compared to work by scholars in sociology, psychology, political science, law, and literature. My talk will explore a number of questions regarding genocide where philosophical thinking can be helpful, such as: what distinguishes genocide from non-genocidal mass murders? is genocide the worst evil imaginable? what kinds of groups are possible targets of genocide? must genocide be massively homicidal? what underlies the sense that genocide is necessarily an evil? and others. My hypothesis is that the idea of social death is helpful for making headway with these questions. In developing this hypothesis, I will present and draw on my theory of evil, which I call “the atrocity paradigm,” because atrocities are my paradigms of evils.