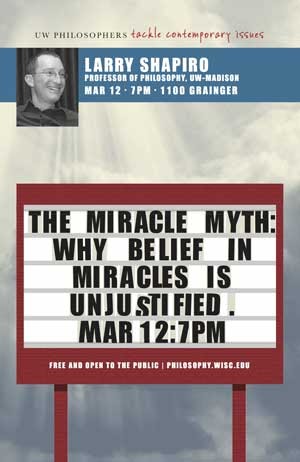 On March 12th, 2014, Larry Shapiro presented his talk entitled “The Miracle Myth: Why Belief in Miracles is Unjustified”. A recording of the talk is available here.

A vast majority of Americans believe in miracles. None, I contend, are justified in their belief. After a few words about justification and the nature of miracles, I construct two arguments against belief in miracles. The first focuses on the kind of inference on which believers rely, i.e. inference to the best explanation. The second reframes in contemporary terms David Hume’s famous argument against believing in miracles. I close with a brief discussion about whether one should care that his or her belief in miracles is unjustified.