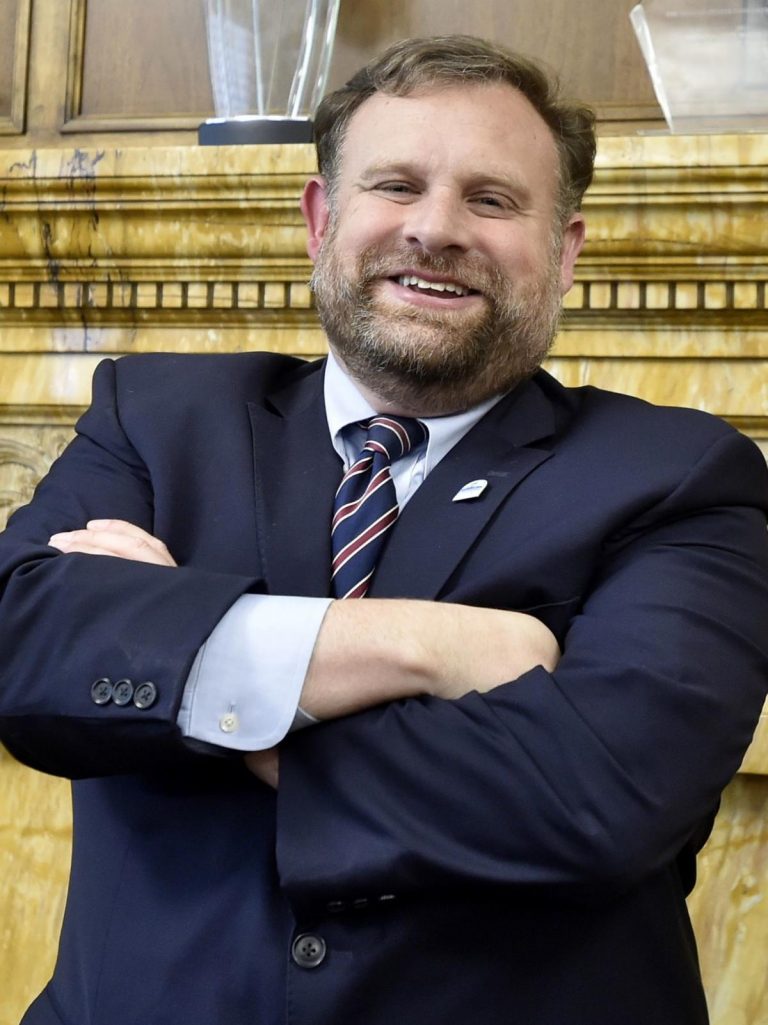 Cory Mason became Mayor of Racine in 2017, having previously served in the Wisconsin State Assembly since 2007. He graduated from UW-Madison with a BA in Philosophy in 2000. He spoke to Harry Brighouse.

When they came to interview me about a big economic decision, I talked in philosophical terms about what would do the most good for my constituents, who are among the least advantaged in America. I used Rawlsian terms. Economist correspondents recognize Rawlsian language, but I don’t think they are used to hearing it from Mayors.

You’ve had a long career in politics. How often do you encounter colleagues who are interested in nuanced arguments about philosophical ideas?

Whether or not they articulate their positions in philosophical terms, officials are always weighing philosophical values, and most do it responsibly. Their language is rarely recognizably philosophical but, their thought processes, and their ideas, usually are.

Would political debate be better, or worse, if more politicians had studied philosophy seriously?

I think it would be better. On the rare occasions when you find people who can debate these issues in the shared language that philosophy provides, drawing on that background really helps to identify what you have in common and where you genuinely disagree.

When I was in the legislature it was rewarding to engage with Representative (now Senator) Dale Kooyenga by debating Milton Friedman’s Capitalism and Freedom. We disagreed politically, but he is a good reader and a good thinker, and our disagreements were respectful and productive.

In politics you’re often overwhelmed by so many decisions and so much detail, and having the conceptual resources to make clear distinctions and think better about weighing the different values at stake really helps public life.

Has philosophy had any practical value for you as you go about the day-to-day work of governing? I’m also curious whether your answer is different now that you’re a Mayor than it was when you were a state legislator.

As a Mayor you have to be much more like John Dewey than like Plato or John Rawls. It’s valuable to think about what society should be like, and what values and principles should guide the ideal society. But when you are Mayor your decisions have an immediate and clear impact on people. Your decisions aren’t going to fundamentally change the principles that society runs on, so it’s a matter of figuring out, pragmatically, what will nudge things in the right direction and will benefit constituents in the short- to medium-term.

What’s your advice for students who would like to be involved in political affairs?

I always advise people who are interested in going into public life to major in something other than political science. You will learn the politics from the doing of it, but what you really need when you come to political life is the range of skills that a broad liberal arts major provides. And I think that Philosophy is the best of those majors.

Philosophy has done so much to help me think critically about the world, both in terms of helping me think about how it should be reformed, but also in terms of knowing how to ask the right question and make the right distinctions. If you can learn how to think critically about the world you can learn the many other things that you’ll need in order to be successful. Few other disciplines give you the kind of intellectual curiosity and ability to look for and find patterns and meanings in the world in which we operate.

I’ll just add: as a philosophy graduate, it has also been helpful to be married to someone who has a philosophy degree. It’s been useful to have that shared discipline.